The most universal answer to the question “why do students procrastinate?” comes down to “because they want to have fun more than they want not to have fun.” Although this answer is completely true and inclusive, it lacks details. It is not exhaustive enough to cover all of the important nuances of why youngsters prefer to put their educational obligations not in the first place. In this article we will go deep to see the reasoning behind this prioritising strategy to have a better perspective to understand the nature of procrastination for everyone, and particularly of students. We will do a little procrastination research, go through the examples of procrastination and will see why people get into the cycke of procrastinating from studying.

To understand the nature of procrastination we must acknowledge the extremely simple concept of action and reward system. If rat pushes a lever 10 times and gets a reward of food in return it will do it until it has:

The cycle is simple. But will a rat play this lever pressing game if it already has the food access? In this thought experiment we will all agree that in these circumstances no healthy rat will not choose to play this lever-pressing game for food instead of eating right away. Of course, it will get better. But not unless it’s hungry.

Now let’s add to that experiment two key elements that will change the decision-making process of the rat the most. From now on:

In this case, a rat will have minimal desire to play the game when it already has rewarding food nearby. Now see where we are heading? Student is the same rat playing this game with the same conditions. 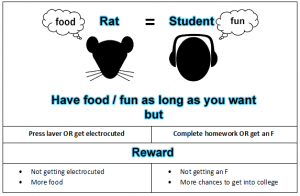 Now even if we could explain to the rat that by pressing the lever it will get a food certificate that will increase chances of getting the food in the future, and the rat believed it, from time to time it would still not follow these rules perfectly. And the reason why behind this is because:

Now to make even more sense out of it, let’s consider that students have a much more diverse and much stronger degree of rule breaking temptations.

Rat equivalent: rat has to press a lever 100 times in order to not get electrocuted and potentially get a rewarding food (when it already has some).

Such facts as the availability of the internet and professional writing services put no guilt on the conscience of teaching staff while signing great amounts of homework. Even if all of it is not difficult, too much of it will eat up a great amount of time.

Rat equivalent: instead of eating, mating with new cell members, running inside the wheel, taking a swim, rat has to blink 1000 times in order to not get electrocuted and potentially get a rewarding food (when it already has some).

Unexciting homework is the thing that causes the feeling of something what they call “fear of missing out.”  Facing this type of homework helps students to relatively understand the reality of what is boring in this life and what is clearly not. It is especially clear when the world has plenty of attractive and exciting things to offer and when they come spontaneously and in limited quantities.

Modern World Offers Too Much Distractions

Informational society creates an endless number of distractions. Mainly because it has channels to spread this information, the information itself and proof that you can get access to it and use it for your own good. As for any other student it can be anything: a barking dog, a running cat outside the window, arguing with neighbours, someone’s invitation to a birthday party, intriguing video, new episode of the favourite show, somebody’s disagreement with a student on social network. On top of that there are unstable situations in the world: extreme weather changes, mass shootings, Russian unleashed war in Ukraine, some virus outbreak, new laws, protests, etc. All of that and many other things makes it difficult for students to focus on homework and not to think of some temporary procrastination break. 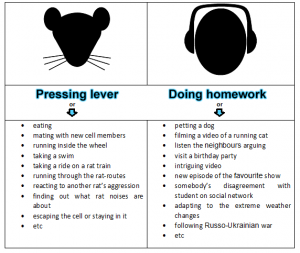 Some Work Better Near Deadlines

Rat equivalent: rat presses lever better when the electric hit is not in the distant future, rather than when it is into the distant future. If a rat hears the electricity that always sounds not too long before the electrocution it will have a lot more motivation to go for the task during the moments of silence.

Brain of animals (including the human brain) has many imperfections and shortcomings. One of them comes down to the fact that it has weak abstract thinking. Of course, animals can use it well enough to imagine food hidden under the objects, or to fly to the Moon and get back to the Earth. But visualisation of the event in the head, it is not as convincing and strong as witnessing physical events live. And the more the time gets closer to this event, the more it becomes real and the more it makes sense to act on this situation. That is why most of the students start their coursework when the deadline will soon be around the corner.

It’s me who writes exclusively incredibly awesome (it’s for me to decide) posts you can find online and particularly on this website. I’m a freelance writer and blogger, and I always find new effective ways of working faster and better. Also I am featured as a top columnist on Quora and author on Today.com and Elephant Journal. TW @zackhargrovejr