We can’t imagine our lives without smartphones and laptops. They help us in solving various problems from getting up on time (alarm clocks) to checking grammar mistakes in our academic papers and business reports. We also use them as calculating tools to make our life less complicated. Besides, downloading the right app can make you forget about complicated math problems. If you need some help with difficult calculations or simply like playing math games and solving logical problems, these applications are exactly what you need.

HiPER Scientific Calculator is an app version of a basic classical engineering calculator. It will work for everyone who grew out of cartoonish apps. A perfect minimalistic calculator for anyone who prefers simplicity and practicality over super-multifunctionality and colorful design. Simpleness of this app is one of the biggest reasons behind its positive reviews and rare complaints among its new and regular users. 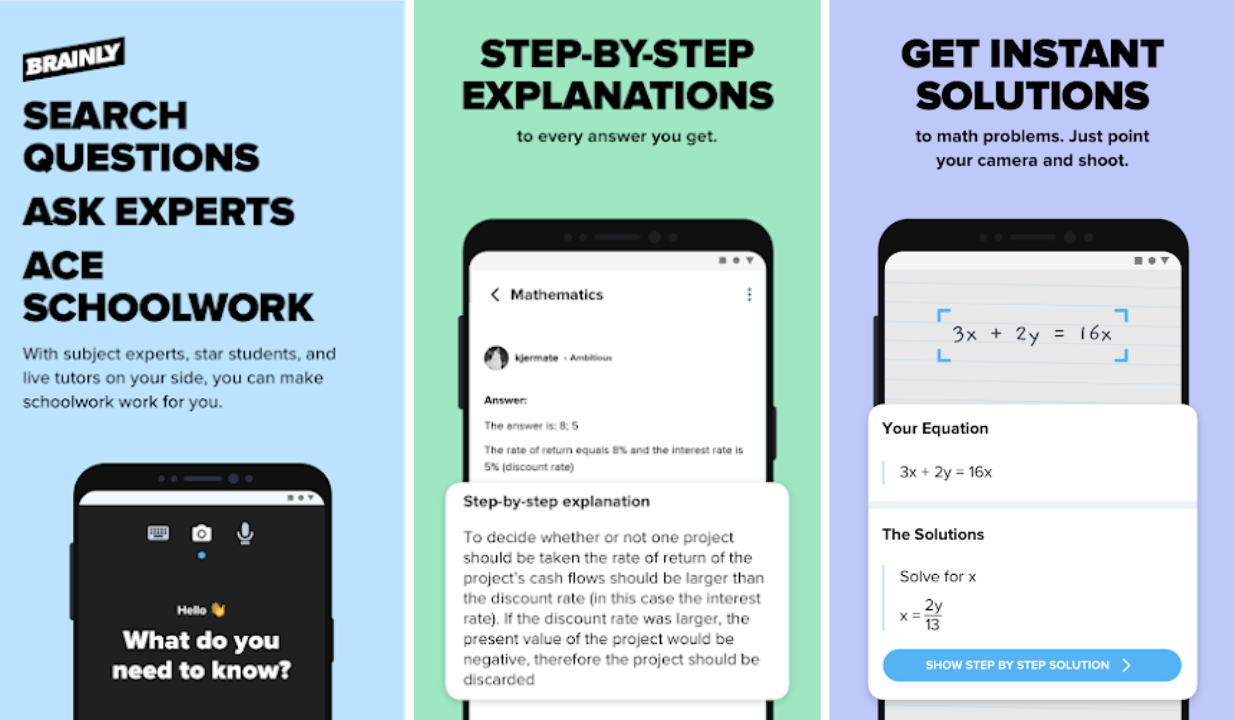 A great choice for math beginners and armature algebra students who dislike or learn to think abstractly. Brainly not only will it give you the right answers and solutions, but it will also support them with brief and friendly educational instructions in the format of cards that will explain and describe any type of basic math equations. The app can also give you points and raise your rank in case you decide to help others who are in need through this app. 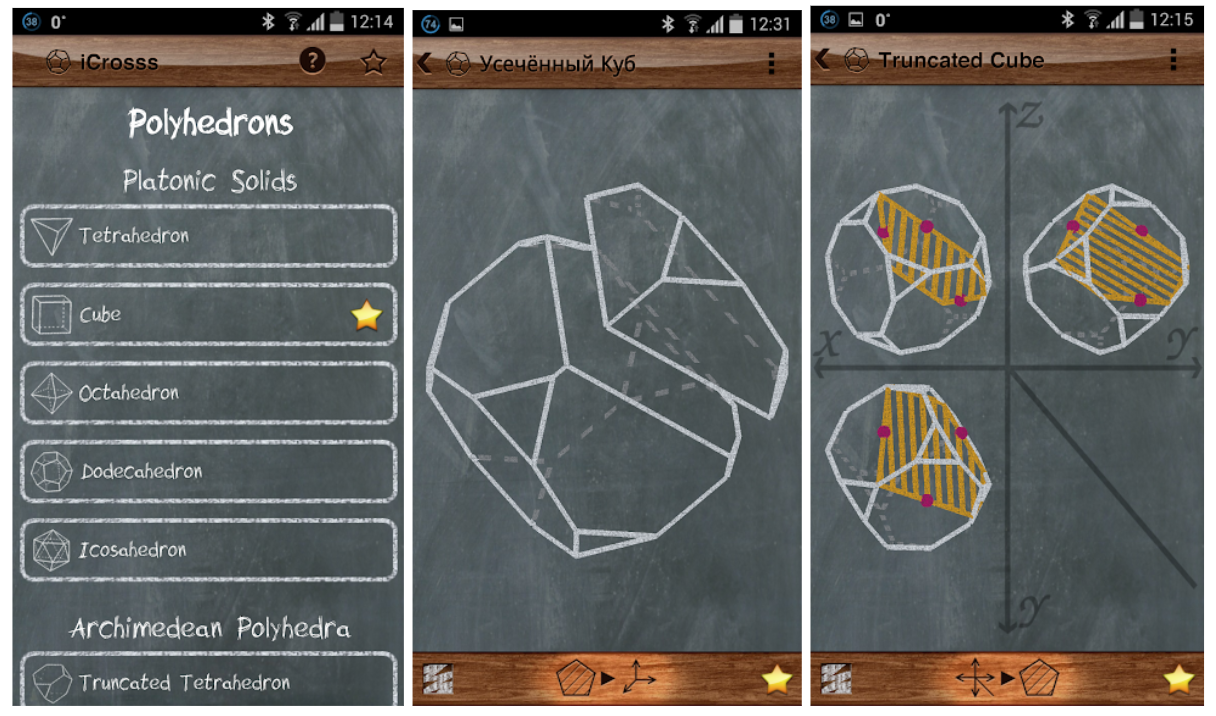 The design of this app will be highly appreciated by any young scientist who prefers old school green board and chalk over new school whiteboard and markers. Quality of iCrosss will help to visualize and study geometry for everyone including those who are having the toughest time with polyhedrons. Since it is basically a unique library of three-dimensional polyhedrons.

This app will help you to learn algebra by the same principle as solving regular puzzles. Although the interface is cartoonish and not as scientific as the ones they probably use in NASA, but DragonBox Algebra 12+ is a trustworthy way to get the main fundamentals of algebra once and for all. Especially for fans of cute gamifications. 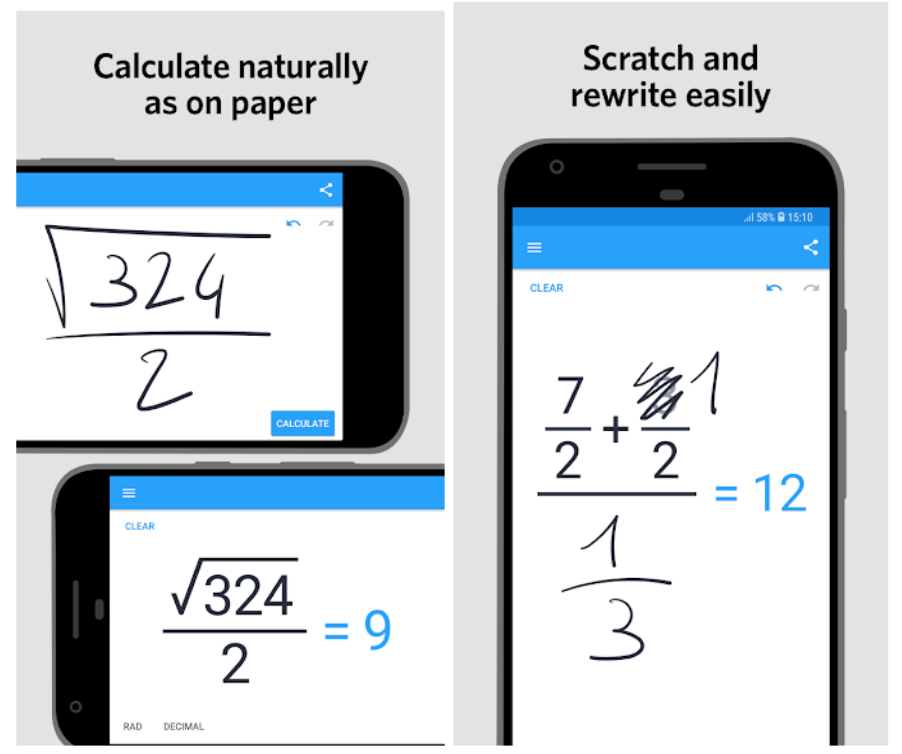 The target audience of MyScript Calculator 2 is part of math engagers who like to scribble calculations without aiming at the sensor keyboard of their cellphones. Besides that, it has a decent memory storage where you can keep a record of everything you perform in the app. It also gives you an option to retrieve past calculations which can be quite useful and help you out once in a while. 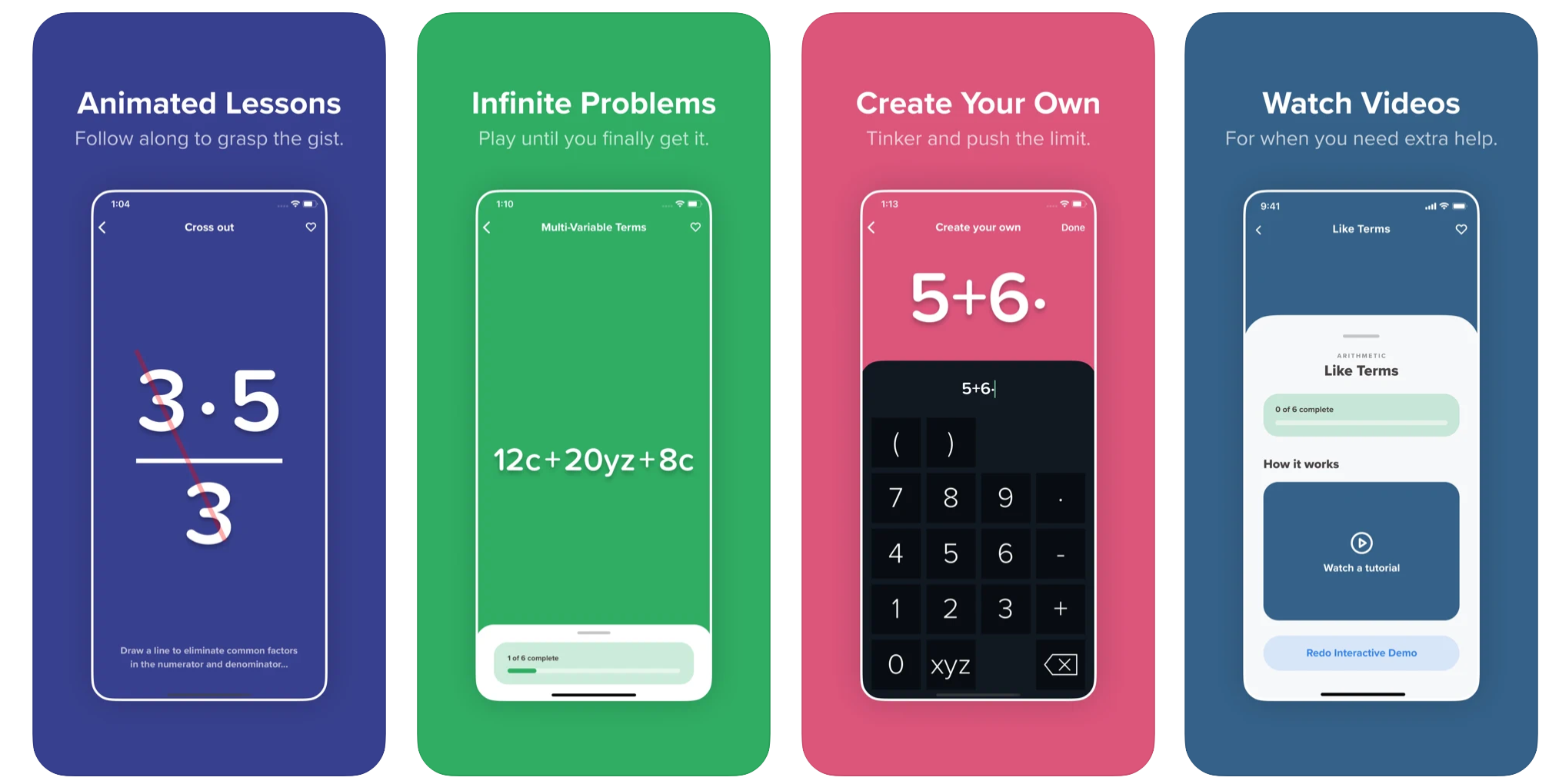 The ideal app for people who were taught to strictly solve the equations the way their teachers wanted. Algebra Touch is perfect for students and ex-students who want to recover from that harmful and anti-scientific experience since it allows you to swap all of the variables however you want until it makes perfect sense, which will make it more interesting and informative.

Calcbot 2 is a great pick for economists. It is not only a simple calculator with basic and engineering functions, but also with a convenient currency converter.
Unlike standard apps, Calcbot 2 enables you to save the results of all previous equations and mark the important ones with a star symbol to review them anytime you need it. Calcbot 2 also has a set of different themes and cool sound effects for each tap. 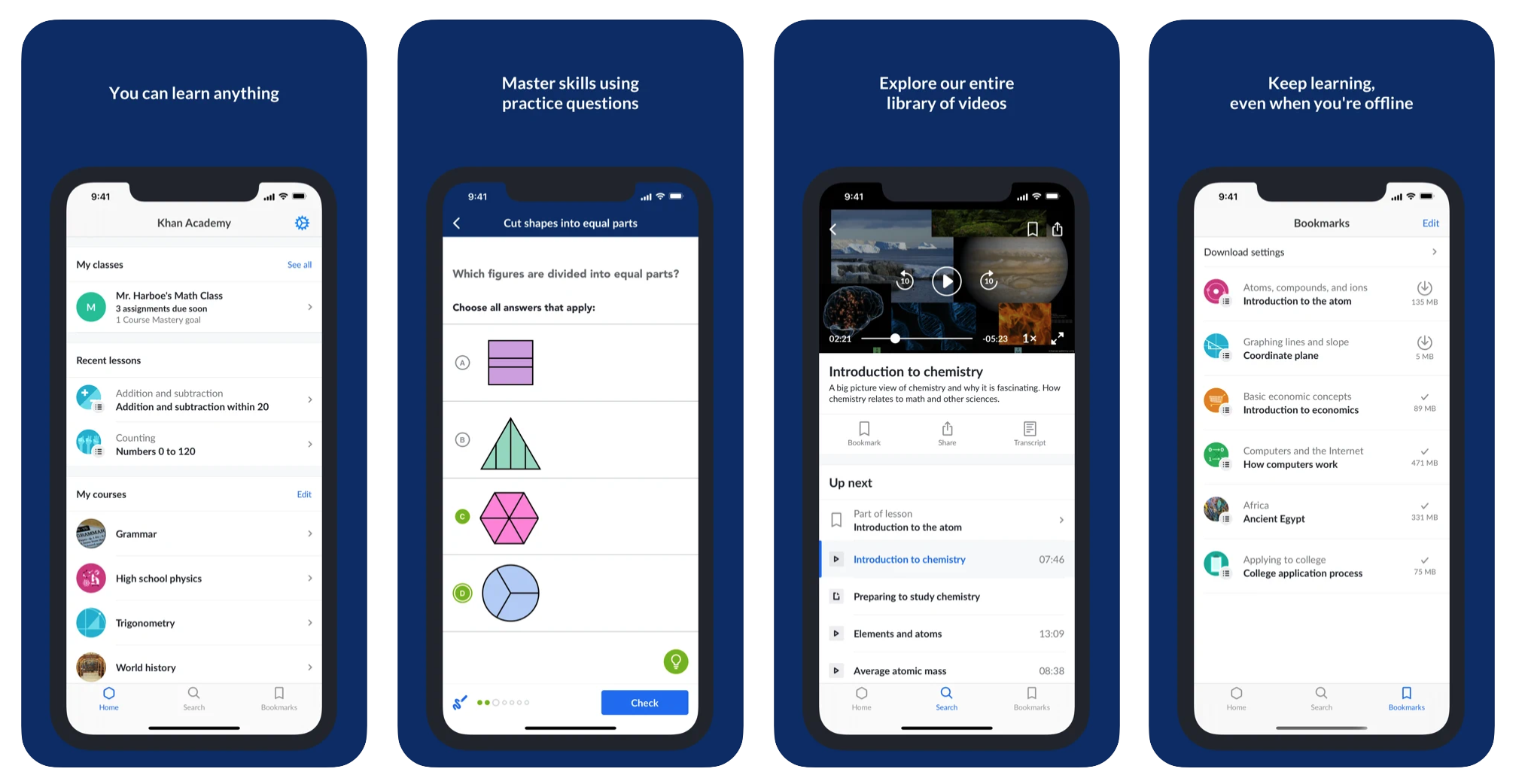 Khan Academy is an app for students who want to not only cope with their calculations, but also to deepen into some of the main branches of science.
Besides Algebra and Geometry, Khan Academy covers such fields as Arts and Humanities, Economics and Finance and even History. It is free, it meets the needs of iOS and Android users and it is usable in both online and offline formats.

MathBoard is one of the main go-to apps for beginners and everyone who experiences any struggles with the basics of algebra. Gamification with a user-friendly interface will help everyone to formulate a proper calculational knowledge and/or to fix any mistakes that were formulated in the past. 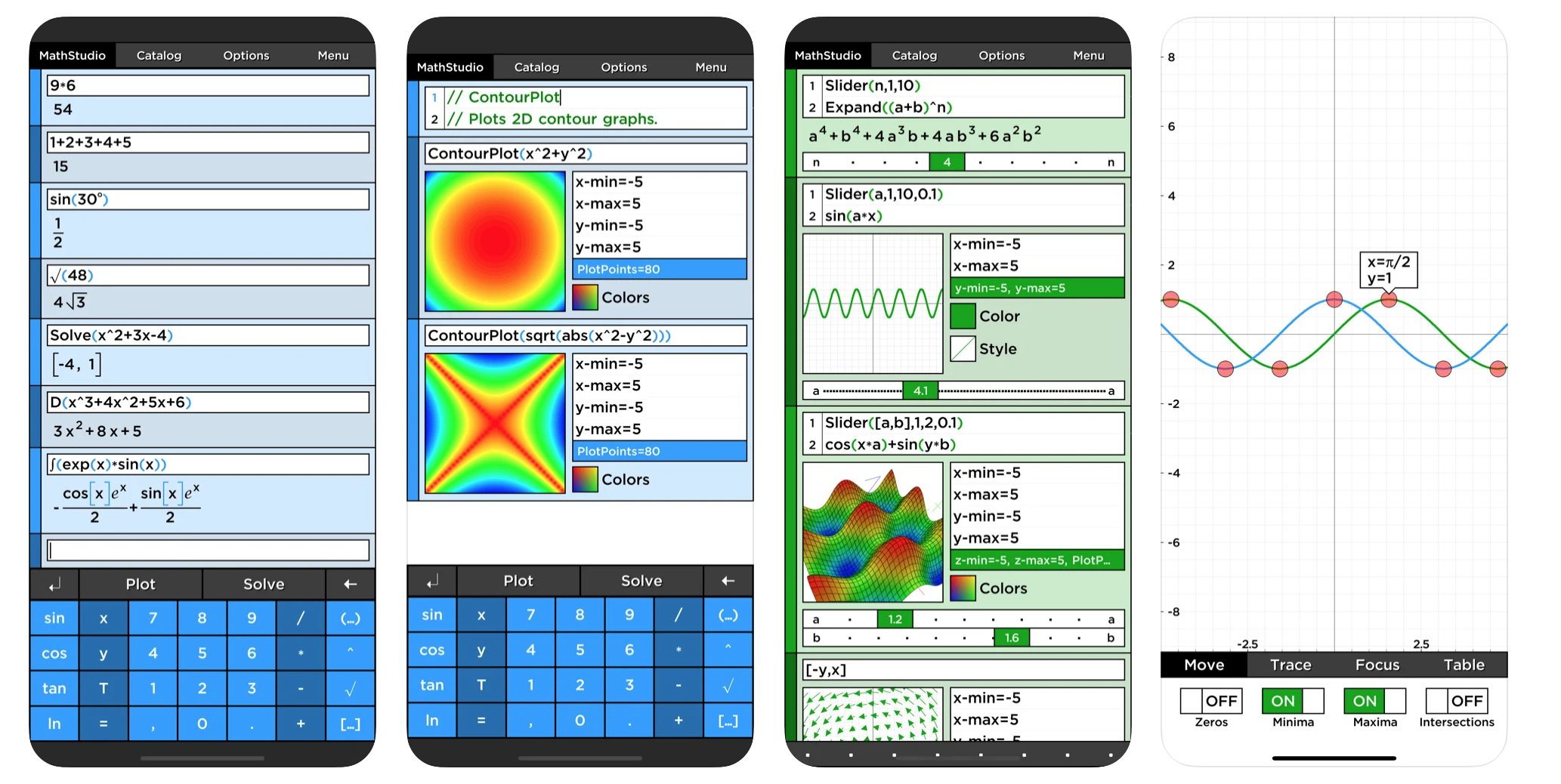 With this app, you can become a real magician and solve any math problem. Just point the camera of your smartphone towards a problem and Photomath will immediately show you a step-by-step solution. It will be of great help when you want to check your homework and have a better understanding of the solution algorithm. You’ll also enjoy the additional options of a calculator here.

We hope you’re not tired of magic yet because this app is an equivalent of David Copperfield in the math digital world. You write an equation on a piece of paper, the recognition system analyzes it and presents a solution to you. MyScript supports basic operations, trigonometry problems, logarithms, and many more.

It’s like having an encyclopedia that you can ask questions and get immediate answers. The app can help you not only with calculus and statistics, but solve crossword puzzles and find out about interesting facts without paying any effort. Wolfram Alpha gives you an access to the universal knowledge and the endless possibilities of broadening your mind.

If you were looking for a flawless and free scientific calculator, don’t look any further. PCalc Lite has numerous features and add-ons you can use to solve trigonometric and logarithmic functions, undo and redo your operations, work with constants, etc. If there’s something you need and the app doesn’t have it, you can buy some of the additional features.

You think that reading math books is boring and unproductive? Try reading them online accompanied by more than 20, 000 interactive questions and lessons. You can solve math problems and see their step-by-step solution. The app recognizes handwriting, so you can relax and keep writing in your favorite notebook. You’ll get a constructive feedback on your progress and receive the problems of the relevant difficulty level. Make learning algebra, geometry, statistics, etc. more interesting.

Now it’s time to get a little bit less serious and play a game. Nobody’s going to judge you as this game is as educational as any other student book. In a playful way, you (or your children) are going to learn the basic rules of elementary algebra by solving logic puzzles of different difficulty levels. There are 200 puzzles to solve and the time you’ll spend on them won’t be spent in vain. 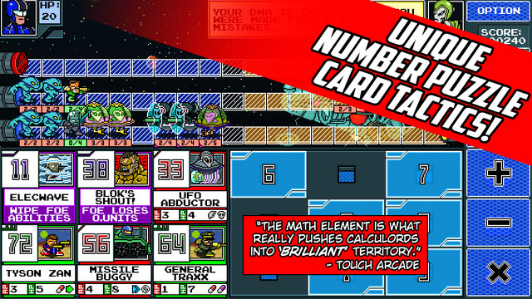 One of the most common questions students ask themselves when solving math problems is “What am I doing this for? Who needs those functions anyway?”. But when it can help you beat the annoying enemy, you get more motivated and involved in the process. Playing Calculords, you have to add, subtract and multiply numbers to destroy your enemy. You Galaxy needs you! And your outstanding math skills, of course.

Here, you’ll find more than 1,400 formulas, figures, and examples to become a real ace in math, chemistry and physics. The app is easy to navigate and very user-friendly. If you’re looking for some basics and don’t want to lose a lot of your time on it, this is a perfect option for you.

It’s a free graphic calculator that offers all the necessary functions to solve your math problems. You can draw functions and find intersections within a short amount of time.

We’ll end this list with a nice educational game where you can become a super spy Agent Prime and defeat the evil Doctor Odd using your exceptional math skills. Each level will offer you some problems and riddles of increasing difficulty level, so be prepared to use all of your secret powers.

Komodo Maths is a great app for tricking young people into studying math. It allows you to build basic algebra skills effortlessly. According to developers of Komodo their adaptive technology responds to the progress of each learner making it suitable for the struggling, the talented and everyone in between. 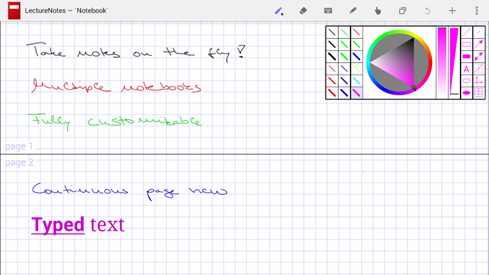 Being involved in math studies implies being attentive during the classes. Especially if you are allowed to use your phone or tablet. LectureNotes enables you to type or write down the important information on your screen with fingers or stylus, upload and edit images and format your notes into PDFs.

Rocket Math is a gamified math quiz learning app with graphical design of a space rocket theme. It is one of the easiest ways to start learning how to calculate. It will also help you to improve your calculation abilities.

Prodigy Math Game is one of the cutest and successful attempts to use gamification as a learning tool for mathematical studies. Create your own character, complete missions, rescue pets, battle bosses, play with your friends and participate in seasonal festivals. All of which will easily improve and deepen your algebraic knowledge.

Socratic is one the most universal and diversified available math app that is available on the internet. Not only does it have step-by-step math explanations and visual guides on the topic of algebra and geometry, but it also offers you professional help on other basic subjects, such as biology, chemistry and even fiction and non-fiction.

It’s me who writes exclusively incredibly awesome (it’s for me to decide) posts you can find online and particularly on this website. I’m a freelance writer and blogger, and I always find new effective ways of working faster and better. Also I am featured as a top columnist on Quora and author on Today.com and Elephant Journal. TW @zackhargrovejr